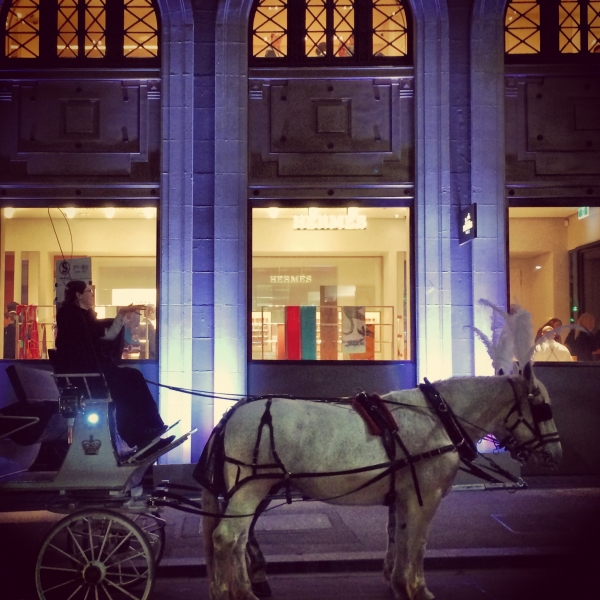 Late last year, Ghost Host was asked to collaborate with Sydney event giant Kat & Co for the very exclusive launch of the new Hermés Store on Collins Street in the Melbourne CBD.

This was to be the night of nights for the lucky 99 guests invited.

Guests were treated to an exclusive first viewing of the new concept store for canapés and bubbles before being whisked away in private horse drawn carriages.

Over 30 horse drawn carriages were used to escort guests through the Melbourne CBD during peak hour!

Guests were then treated to a private banquet and ballet show produced by the Sydney Dance Company held in the cathedral room of the former stock exchange, now ANZ gothic bank.

Each guest had their own personal waiter for the duration of the five course meal which was served on Hermés china along with art installations by Anna Highfield.

Ghost Host had the task of managing and co-ordinating the horse drawn carriages - quite the task when you are familiar with Melbourne traffic!

It was an amazing night filled with passion and laughter and gained much publicity for the Hermés group.

Thanks for the invite Kat & Co!

Hidden Sea Wine National Vendor Dinners
A travelling dinner series for wine brand Hidden Sea showcasing the very best of their beautiful vintages from South Australia.  Ghost Host exectued a series of VIP dinners for their vendors and distributors in Sydney,…
Read More »
WHEREIS PAINT PARTY
Whereis hosted the event of the year with the infamous Paint Party.  A concept created by Ghost Host and thrown in conjunction with the amazing Taboo Group but produced exclusively for Whereis to host Sensis ambassadors and…
Read More »
GINGER &THE GHOST Album Launch
Sydney based band Ginger and The Ghost - visual artists turned musical duo launched onto the international music scene in 2013 with their debut album - One Type of Dark. Instantly realising success and booking shows around the…
Read More »